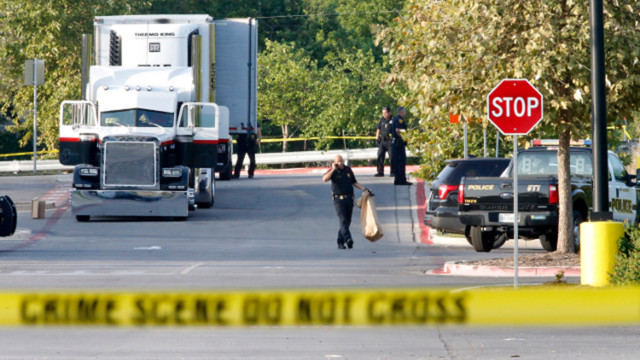 "The recent deaths of 10 individuals in Texas again brought attention to people risking their lives in search of a better future.

U.S. officials say those who died were part of a group who paid smugglers to help them get into the United States illegally. They were being transported in the back of a tractor-trailer truck.

Police discovered eight bodies inside the truck’s trailer early Sunday outside a Walmart store in San Antonio. Two more victims died after being taken to the hospital. Police said 39 people were inside the truck when rescuers arrived. But survivors said up to 200 people may have been inside during the trip." read more / listen to the story


Words in This Story

heatstroke – n. serious medical condition caused by staying too long in the heat

immigrant – n. person who goes to a country with the intention of living there

human smuggling – n. the importation of people into a country illegally, with those being smuggled generally cooperating

human trafficking – n. the importation of people into a country against their will, for the specific purpose of exploiting them to work in the sex trade or other forced work situations

journey – n. traveling from one place to another

calculus – n cost or value of something

famine – n. situation in which many people do not have enough food to eat
Posted by US Citizenship Podcast at 12:30 AM