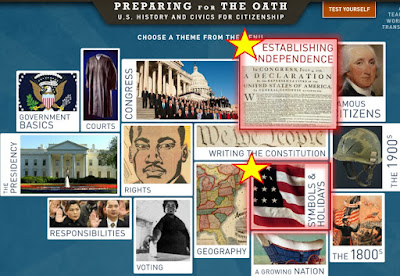 SI.edu/USCIS: Preparing for the Oath: U.S. History and Civics for Citizenship
This web resource provides online videos and activities on the 100 civics questions from the naturalization test and highlights museum objects from the Smithsonian Institution. Visit the “Establishing Independence” and “Symbols and Holidays” themes for information on Independence Day.


USCIS: For Independence Day
USCIS highlights some of the resources for learners and teachers that are related to this important holiday.  Includes Thomas Jefferson and the Declaration of Independence and Establishing Independence.

Rachel's English: 4th of July Traditions
Happy 4th of July! This is the day we celebrate America’s independence. Study vocabulary, pronunciation, and phrases as we study REAL English conversation and learn about 4th of July traditions in the US.
state.gov: Celebrating Independence Day: The Resilience of U.S. Democracy (2021)
This #IndependenceDay, we celebrate our democracy's progress toward a more equitable and prosperous society of the people, by the people, and for the people.
TED-ED: What you might not know about the Declaration of Independence - Kenneth C. Davis (video)
In June 1776, a little over a year after the start of the American Revolutionary War, the US Continental Congress huddled together in a hot room in Philadelphia to talk independence. Kenneth C. Davis dives into some of the lesser known facts about the process of writing the Declaration of Independence and questions one very controversial omission.

VOA News: Ahead of Independence Day Holiday, Children Take Oath to Become US Citizens. (2021)
One of the themes of this year's Smithsonian Folk Life Festival is immigration. As part of the festival events, a group of 25 children were sworn in as U.S. Citizens, just ahead of America's Independence Day holiday. VOA's Elizabeth Cherneff reports.
VOA Learning English;  America's Birthplace: Independence National Historical Park (mp3 and article)
This week, our U.S. National Parks journey takes us to the eastern city of Philadelphia, an important place in American history.
wh.gov: President Biden Participates in a Naturalization Ceremony (2021)
President Biden Participates in a Naturalization Ceremony to Welcome Citizens to Our Country Ahead of Independence Day
wh.gov: This Fourth of July, America is Back (2021)
Today, Americans are #BackTogether – celebrating our country’s July 4th Independence Day and the progress we have made against the virus together.
Posted by US Citizenship Podcast at 12:30 AM