American Women who Fought for the Right to Vote 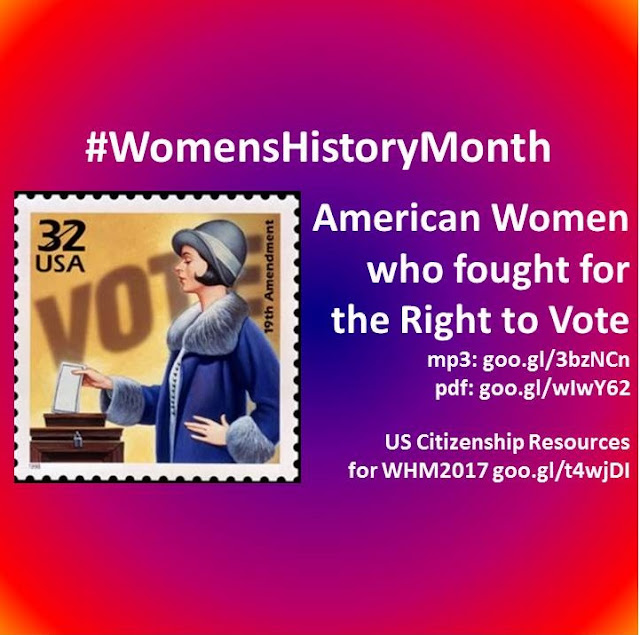 American Women who Fought for the Right to Vote
mp3: https://goo.gl/3bzNCn
pdf: http://goo.gl/wIwY62

Lydia Chapin Taft was the first woman known to legally vote (1756) in colonial America. During the early 1800s, states passed laws to stop women from voting.

Susan B. Anthony and Elizabeth Cady Stanton based the Seneca Falls Declaration on the Declaration of Independence. They wrote: “all men and women are created equal [and] are endowed by their Creator with certain inalienable rights” (1848). They worked for women’s rights, especially the right to vote.

Alice Paul led the 1910s campaign for the 19th Amendment (1920) to the U.S. Constitution which prohibits sex discrimination in voting.

Fanny Lou Hammer and Ella Baker organized voter registration drives in the American South. Their work led to the Voting Rights Act of 1965 which prohibits racial discrimination in voting.
Also check out:

N-400 pdfs for practice scripts based on the N-400 Application of Naturalization.
http://www.uscitizenpod.com/p/n-400-practice_27.html

Citizenship by Language for Citizenship Resources organized by language.
http://www.uscitizenpod.com/p/blog-page_17.html

Citizenship by Country for Citizenship Resources organized by country of origin.
http://www.uscitizenpod.com/p/resources.html
Posted by US Citizenship Podcast at 12:30 AM