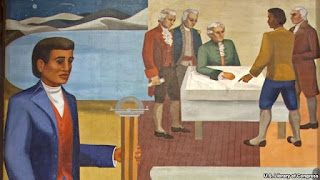 VOANews: Benjamin Banneker
Benjamin Banneker was one of the few free black people in the American colonies. The self-taught mathematician helped plan the nation’s capital and wrote a popular book. Today, he is remembered for questioning how Thomas Jefferson could ignore slavery in the Declaration of Independence.

uscitizenpod: PODCAST: USCIS 100:94 Washington DC, Benjamin Banneker, and Secretary of State Thomas Jefferson
Today we continue our exploration of the USCIS History and Government questions and African American History. Today we will talk about USCIS 100:94. What is the capital of the United States?*. We will first read about Q94 from the USCIS M638 quick civics lesson. Then we will learn about Benjamin Banneker, who surveyed Washington DC, published an almanac, and then sent the almanac along with ab anti-slavery letter to the then Secretary of State Thomas Jefferson.

USCIS 100:94. What is the capital of the United States?*.
This is an exerpt from a letter a letter in which Benjamin Banneker challenged Thomas Jefferson's ideas about the inferiority of African-Americans.

This, Sir, was a time in which you clearly saw into the injustice of a State of Slavery, and in which you had Just apprehensions of the horrors of its condition...you publickly held forth this true and invaluable doctrine...“We hold these truths to be Self evident, that all men are created equal, and that they are endowed by their creator with certan inalienable rights, that amongst these are life, liberty, and the persuit of happiness.”

...you were then impressed with proper ideas of the great valuation of liberty,
and the free possession of those blessings to which you were entitled by nature;
but Sir how pitiable is it to reflect,
that although you were so fully convinced
of the benevolence of the Father of mankind,
and of his equal and impartial distribution of those rights and privileges
which he had conferred upon them,
that you should at the Same time counteract his mercies,
in detaining by fraud and violence
so numerous a part of my brethren under groaning captivity and cruel oppression,
that you should at the Same time be found guilty of that most criminal act,
which you professedly detested in others, with respect to yourselves.

Sir, I suppose
that your knowledge of the situation of my brethren
is too extensive to need a recital here;
neither shall I presume to prescribe methods
by which they may be relieved,
otherwise than by recommending to you, and all others,
to wean yourselves from those narrow prejudiceswhich you have imbibed with respect to them,
and as Job proposed to his friends
“Put your Souls in their Souls’ stead,”
thus shall your hearts be enlarged with kindness and benevolence towards them,
and thus shall you need neither the direction of myself or others
in what manner to proceed herein.