USCIS 100:21. The House of Representatives
has how many voting members? 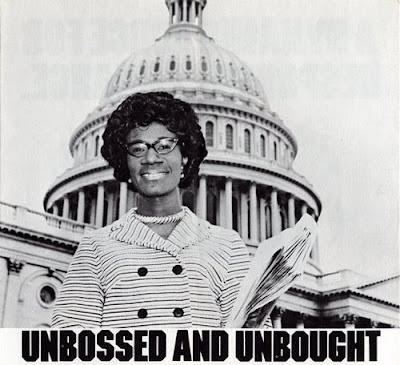 In 1968, she became the first African-American woman elected to Congress. She supported education, health care, social services, and reductions in military spending.

Shirley Chisholm hired only women for her office staff. Chisholm said that during her political career, she faced much more discrimination because she was a woman.

Shirley Chisholm created controversy when she visited George Wallace, the Governor of Alabama, in the hospital soon after his shooting in May 1972. Although they had opposite political views, Wallace deeply appreciated her kindness.

Several years later, when Congresswoman Chisholm worked on a bill to give domestic workers the right to a minimum wage, Governor Wallace helped get the votes of enough Southern congressmen to pass Chisholm's bill.

Shirley Chishom will always be remembered as "Unbought and Unbossed."


21. The House of Representatives has how many voting members?
LISTEN to US Citizenship Podcast
*NEW* VOA Learning English: Shirley Chisholm, 1924-2005: The First Black Woman Elected to the U.S. Congress (03/20/11)

She was an activist who worked to improve the lives of others PEOPLE IN AMERICA (download mp3)
Posted by US Citizenship Podcast at 12:30 AM