Remembering the Fall of Saigon 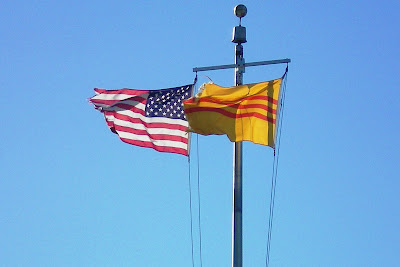 The Vietnamese and American flags flying together
on the spot of the future Vietnamese Heritage Garden, San Jose
After the fall: Vietnamese remember 'Black April' 35 years later by Bruce Newman, SJ Mercury. The fall of Saigon will be commemorated during the following local events:

It was 35 years ago that the American presence in Vietnam came to an end with a helicopter airlift from the roof of the U.S. embassy in Saigon. Wayne Corey, Steve Thompson and Pham Tran, affectionately known by his initials P.T., were VOA correspondents in Saigon in those days. Wayne, since retired and P.T., who's still working with us, spoke with VOA's Neil Currie.

Started in 2004, the Vietnamese American Heritage Project's vision is to commemorate the 30 plus years of mass Vietnamese migration to the United States, telling the story of challenge, sacrifice, and change—an ongoing journey that is changing the face of America.

Posted by US Citizenship Podcast at 9:52 AM