This video is a introduction to the playlist: Adult Education Matters, a series of videos that explores WHY Adult Education is important to individual students and the society at large.

Adult Education Week is usually celebrated in the second week of April. On Monday and Tuesday, representatives from Adult Schools all over California will go to Sacramento to speak to their state legislators about funding for adult education. This includes money for ESL, Civics, Citizenship, GED, Corrections programs, plus Career Technical Education--all of which are very, very important in the state of California and the other states as well.

Students and staff, friends and family can participate by writing letters of support to their state legislators or contact them via the CCAE mobile app. Simply tell them about WHY you love your school and how your school has CHANGED your life.

If you want to learn more facts about Adult Education, go to Educate and Educate (educateandelevate.org), a collaboration between the Coalition on Adult Basic Education and National Council of State Directors of Adult Education.

Use hashtags #AdultEducationMatters #AdultEd #MoveAheadWithAdultEd #SupportK12AdultEd in your social media posts.  Tell the world why you LOVE your school.

Posted by US Citizenship Podcast at 12:30 AM No comments: 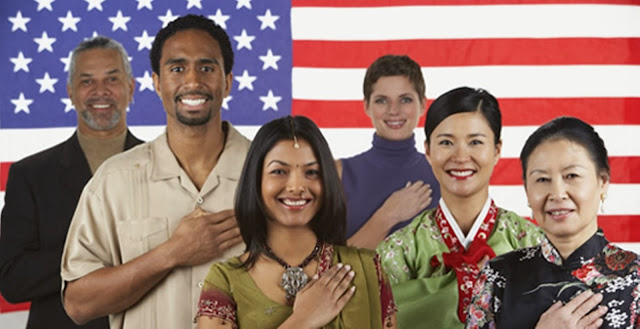 USCIS.gov: The Official Website of the Department of Homeland Security

ESL, CITIZENSHIP, CIVICS, and HISTORY RESOURCES
American English at State: Celebrate! Holidays in the USA
This book discusses the ten federally-recognized holidays in the United States, as well as many celebratory days and heritage months. Download as an e-book or as individual PDF chapters.

Ben's Guide to the U.S. Government
Ben's Guide is designed to inform students, parents, and educators about the Federal Government.  Check out the Master level Learning Adventures.

Cambridge Ventures Arcade: Citizenship
Prepare for the citizenship.  Includes not only 100qs and spelling, but good N-400 vocabulary practice.  Great N-400 vocabulary and 100 Civics/History questions practice! For ESL, focus on the PERSONAL INFORMATION section for each level.

CLINIC: The Citizenship Toolkit
Many free resources including downloadable Citizenship guide and translations of the Civics questions in more than 20 languages

CLINIC: Citizenship for Refugee Elders
This handbook contains information on how to create and maintain a citizenship program for older refugee immigrants. Included in the book are issues of teaching this population and teaching ideas and materials.

Evangelicals for Social Action: As the Citizen Among Us: Loving the Immigrant as Ourselves
ESA’s free small group study guide on immigration and civil rights

Elizabeth Claire's Easy English News: US Constitution in Simple English
A free digital download of the US Constitution with a side-by-side translation in Simple English.
ESL Library
Great lessons for multiple literacy levels.  Besides their Section on the American Presidents, there are lessons about activists and events.  Subscription required!
ESSA Group
Great series of online Citizenship Prep videos.
Grantmakers Concerned with Immigrants and Refugees
GCIR has assembled collections of immigrant- and refugee-related resources on the following subtopics: Children, Youth, and Families, Demographic Data, Economy, Education, Enforcement & Detention, Health, LGBT, Refugees, and Women.

iAmerica
iAmerica's Citizenship guide to make sure you qualify for U.S. citizenship, help you fill out your application properly, and include the right documentation in your packet to USCIS. Sign in to download the guide in English or Spanish

I Am An Immigrant
June 1st begins Immigrant Heritage Month 2017 and the ‘I Am An Immigrant’ campaign is launching ‘I Stand With Immigrants’, a brand new year-long initiative that provides new avenues to take in support of immigrants.

Informed Immigrant
Many resources for DACA and undocumented immigrants in English and Spanish.  Check out their Know Your Rights Guides.

ILRC: Annotated N-400 and Translations in Spanish and Other Languages
This is an outstanding collection translations of the N-400 by the The Immigrant Legal Resource Center (ILRC) and its partners.

ILRC: RED CARDS: Know Your Rights
The ILRC’s Red Cards help people assert their Constitutional rights and defend themselves in many situations, such as when ICE agents go to a home. Includes SP / CH / HM / AR / KR

Lessons on American Presidents
Ready-To-Print Handouts, MP3s & Online Quizzes about all 44 US Presidents by Sean Banville

ListenandReadAlong: USCitizenship Test Material
AS the announcer reads the USCIS M638: Study Booklet: Learn About the United States Quick Civics Lessons, the words are highlighted!
ListenandReadAlong: US History
As the VOA announcer reads the history lesson. the words are highlighted!
Literacy Pittsburgh English Channel
Videos of live English and Citizenship Lessons from the staff of Literacy Pittsburg.  Look for Teacher Nicole's Citizenship videos.
Minnesota Literacy: Citizenship
The Citizenship Kit provides teachers and volunteer tutors with all of the materials that necessary to help learners prepare for all portions of the citizenship interview, as well as activity ideas to challenge learners and keep them engaged as they study one-on-one with a tutor.  Sign in to get the Citizenship Kit, (a 70 page+ pdf).

Rong-Chang: American Culture and Customs
100+ Short stories and audio plus vocabulary, comprehension, cloze, and dictation exercises
USA Hello Citizenship
A non-profit organization that uses the power of the internet to help immigrants, asylum seekers, refugees and the communities that welcome them build brighter futures for themselves and their families.  See their N-400 vocabulary list or join the online class.

US Citizenship Podcast
A daily blog of Citizenship resources and news with a special emphasis on N-400 practice.

uscitizenpod on YouTube
100+ videos from US Citizenship Podcast.  Students practice citizenship interviews and the 100 questions.
VOA Learning English: US History
The history of the United States. Includes sections for the US Constitution, Presidents, Congress, the Supreme court and More!  For separate articles, audio, and videos website with individual media files.  Also visit their YouTube channel and check the America's Presidents playlist.
VOA News: Immigration
The latest info about U.S. immigration and more!  Also visit the VOA News You Tube channel.
MORE CIVICS RESOURCES

60-seconds Civics
An outstanding daily podcast that deliver quality US civics and history content.  Check out their new quiz daily on their website.
Google Cultural Institute: The White House
Take a 360-degree virtual tour and explore the art and furnishings of the White House.

History Channel: Ellis Island
For over 60 years, Ellis Island was the gateway for millions of Americans to the United States. Explore the legacy of this symbol of American immigration.

iCivics
The iCivics games place students in different civic roles and give them agency to address real-world problems and issues.

wh.gov: A Weekly Conversation: On The Line With Susie from Texas
This conversation between President Biden and Caretaker Susie brings up so cares and concerns of the American people.  Through the California In-Home Supportive Services (IHSS) Program, younger relatives receive medical training and a small wage to take care of their elders--work which normally be unpaid--thereby supporting family dignity.
Practice talking about your job with this N-400 section script:
Here is a Pop Civics Quiz
100:93. Name one state that borders Mexico.
100. Name two national U.S. holidays.
USCIS 100:36. What are two Cabinet-level positions?
USCIS 100:16. Who makes federal laws?
USCIS 100:33. Who signs bills to become laws?
Posted by US Citizenship Podcast at 10:16 AM No comments:


Income Tax Day
Here are fifteen citizenship questions from the N-400 and the USCIS Civics Test about taxes and our economic system. Happy Income Tax Day!