“Congratulations, you are all United States citizens.” With these simple words, a federal judge welcomed new citizens as part of a series of naturalization ceremonies held in recent weeks at professional baseball stadiums across the country. This video captures the momentous occasions with interviews of new citizens about what it means to be an American.

“This is my home, and it feels good to say I belong here, that I am a citizen,” said one woman who had just taken the Oath of Allegiance.

Since 2015, the federal Judiciary has celebrated the weeks surrounding Constitution Day and Citizenship Day by hosting naturalizations in distinctive settings. This year, federal judges are naturalizing more than 700 citizens at 11 major and minor league ballparks.

On Sunday, at the Philadelphia Phillies stadium—just a short distance from where the Constitutional Convention drafted the nation’s founding document—Chief Judge Juan R. Sánchez swore in 15 new citizens at a game attended by more than 39,000 people.

Among the candidates was Saurav Upadhyay, 32, a Nepalese immigrant. He lived on just $20 a week when he came to America to go to college. “It was a lot of rice and, sometimes, some soy sauce,” he said. He now does international work for the Society of Friends in Pennsylvania.

The immense joy of the newly minted citizens was shared by baseball fans and presiding judges alike. Magistrate Judge Michael Newman, who administered the Oath of Allegiance in Dayton, said a standing ovation from fans was “a recognition of what an important event this is.” Newman added, “It’s exciting to me because, what’s more American than baseball?”
Constitution Day and Citizenship Day are officially observed on Sept. 17, the date in 1787 that delegates signed the U.S. Constitution.
Posted by US Citizenship Podcast at 12:30 AM 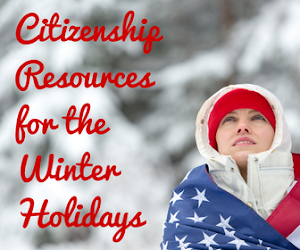