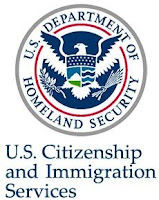 The United States government agency that oversees immigration has changed its mission statement. The new version no longer describes the U.S. as a “nation of immigrants.”


Posted by US Citizenship Podcast at 12:40 PM