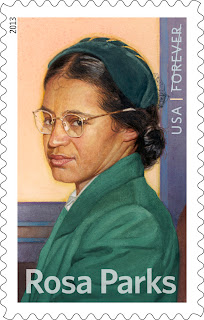 On December first, nineteen fifty-five, in the southern city of Montgomery, Alabama, a forty-two year old black woman got on a city bus. The law at that time required black people seated in one area of the bus to give up their seats to white people who wanted them.

The woman refused to do this and was arrested.
This act of peaceful disobedience started protests in Montgomery that led to legal changes in minority rights in the United States. The woman who started it was Rosa Parks (read more)

▪ civil rights (movement)
Posted by US Citizenship Podcast at 12:30 AM