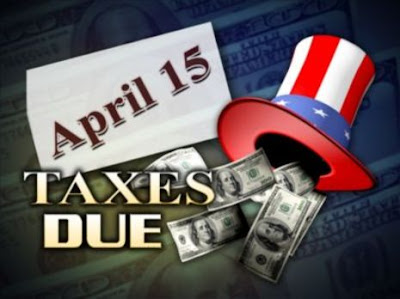 USCIS 100:56. When is the last day you can send in federal income tax forms?*

The government began collecting income tax for the first time through the Revenue Act of 1861. This was only temporary. In 1894, a flatrate federal income tax was enacted, but the Supreme Court said this was unconstitutional.

Finally, in 1913, the 16th Amendment was ratified. It gave Congress the power to collect income taxes.

Today, “taxable income” is money that is earned from wages, selfemployment, tips, and the sale of property. The government uses these taxes to keep our country safe and secure. It also tries to cure and prevent diseases through research. In addition, the government protects our money in banks by insuring it, educates children and adults, and builds and repairs our roads and highways. Taxes are used to do these things and many more. (USCIS M-638 Quick civics Lessons)
Posted by US Citizenship Podcast at 12:30 AM