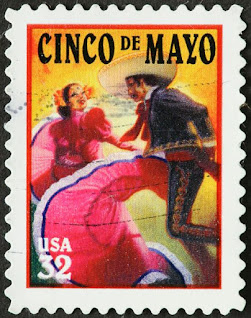 Cinco de Mayo is a celebration held on May 5. The date commemorates the Mexican Army's surprise victory over French forces at the Battle of Puebla on May 5, 1862. In the late 1980's, California schools and cities in California started to celebrate Cinco de Mayo as an expression of our state's Mexican-American heritage. However, some people confuse Cinco de Mayo with Mexico's Independence Day.
Mexico's Independence Day is celebrated on September 16 and is similar to America's Independence Day on July 4th. Cinco de Mayo is closer to our Patriot's Day, which is celebrated in the New England states  during mid-April. Patriot's Day commemorates the Battles of Lexington and Concord, the first battles of the American Revolutionary War. For more that 100 years, the city of Boston has celebrated Patriot's Day by hosting the Boston Marathon, the world's largest marathon.

But let's get back to Cinco de Mayo. Today I have selected five topics to showcase Mexican-American heritage: The constitution and the Bill of rights. the Legislative Branch, the Executive Branch, The Judicial Branch, and Geography and Holidays. I will read the questions, and Mexican-American students from our ESL3 class will read the answers.
Listen to the podcast, then download the pdf from our website, uscitizenpod.com, and take the quiz:

Five more resources:
Posted by US Citizenship Podcast at 12:30 AM