Freedom of the Press: A Tour of VOA and the Newseum

USCIS 100:06. What is one right or freedom from the First Amendment?*


uscitizenpod: Voice of America and the Newseum

These are some of the pictures from my tour of VOA and the Newseum.

Voice of America (VOA) is the official external broadcast institution of the United States federal government. VOA provides a wide range of programming for broadcast on radio and TV and the Internet outside of the U.S. in 43 languages.

VOA produces about 1,500 hours of news and feature programming each week for an estimated global audience of 123 million people, "to promote freedom and democracy and to enhance understanding through multimedia communication of accurate, objective, and balanced news, information and other programming about America and the world to audiences overseas."

Check out Voice of America at www.VOANews.com or learningenglish.voanews.com.
For more VOA info/history, go to www.insidevoa.com.


The Newseum is a museum dedicated to freedom of the press and other First Amendment issues.

For more info about the Newseum, see www.newseum.com. 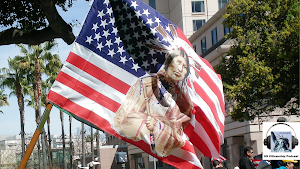