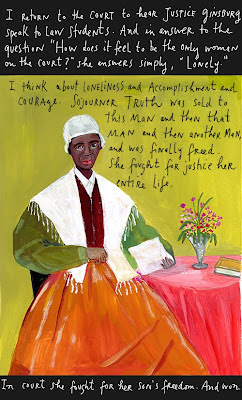 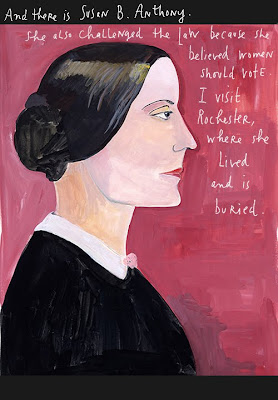 Sojourner Truth and Susan B. Anthony by Maira Kalman in May It Please the Court

Today we continue our exploration of the USCIS History and Government questions and African American History. Today we will talk about USCIS 100:77. What did Susan B. Anthony do?*.

from "Ain't I a Woman?” by Sojourner Truth

That man over there
says that women needs to be helped into carriages,
and lifted over ditches,
and to have the best place everywhere.
Nobody ever helps me into carriages,
or ober mud-puddles,
or gives me any best place!
And ain‘t I a woman?
Look at me!
Look at my arm!
I have ploughed,
and planted, a
nd gathered into barns, a
nd no man could head me!
And ain’t I a woman?
I could work as much and eat as much as a man
—when I could get it—
and bear the lash as well!
And ain‘t I a woman?
I have borne thirteen chilern,
and seen them most all sold off to slavery,
and when I cried out with my mother’s grief,
none but Jesus heard me!
And ain’t I a woman?

...Where did your Christ come from?
From God and a woman!
Man had nothin’ to do with Him.

If the first woman God ever made
was strong enough to turn the world upside down all alone,
these women together ought to be able to turn it back,
and get it right side up again!
And now they is asking to do it,
the men better let them.

In 1979, she became the first woman whose image appeared on a circulating U.S. coin. The coin is called the Susan B. Anthony dollar and is worth one dollar. (source: USCIS M-638)