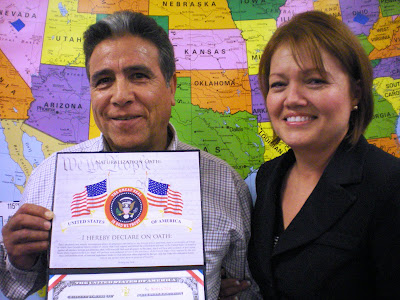 Alfredo is proud of his family, his Union, his Mexican heritage,
and his American citizenship!
Alfredo Quintana was born in Guadalajara, Mexico and came to the United States in 1972. He settled in Milpitas, and joined Local Union 270 AFL-CIO as a construction worker. Alfredo currently serves as the Executive Board-Field Representative and travels all over Central California, organizing Union members and working on local political campaigns. On March 25, Alfredo became an American citizen. Bravo!