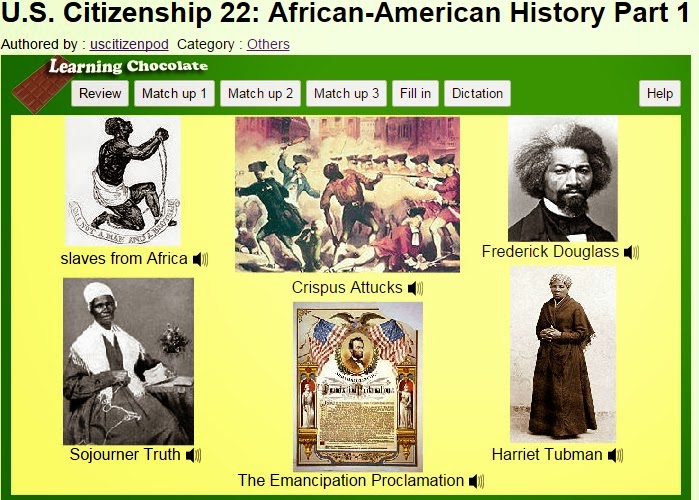 February is African-American History Month.
For more information, see http://www.africanamericanhistorymonth.gov/
For a list of the USCIS 100 History and Civics Questions, see http://goo.gl/lbeoGB

The first Africans came to America in 1629.
USCIS 100:60 What group of people was taken to America and sold as slaves?

The Boston Massacre began as a protest against British soldiers and ended in violence.
Crispus Attuks, and African-American man, was shot during the Boston Massacre.
He was one of the first people who died during the protest.
USCIS 100:61 Why did the colonists fight the British?

Harriet Tubman was a runaway slave.
She returned many times to the South to lead other slaves to freedom in the North.
USCIS 100:73. Name the U.S. war between the North and the South.

Sojourner Truth and Frederick Douglass were abolitionists.
They fought against slavery.
USCIS 100:74. Name one problem that led to the Civil War.